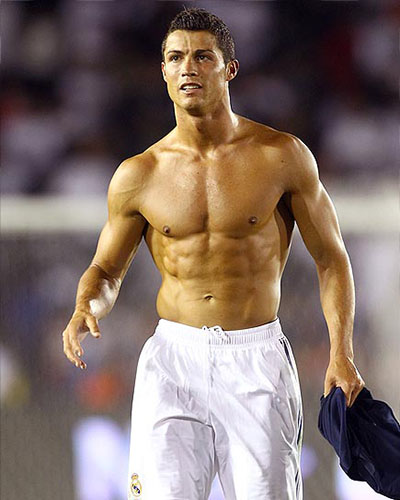 Among the many awards Ronaldo has won over the years, the 2008, 2013 & 2014  FIFA World Player of the Year would have to be the crown jewel in his trophy cabinet. This only scratches the surface of this football stars long list of achievements, that would without a doubt, never come to actualize without his relentless years of gruelling training both in and out of the gym.

Christiano Ronaldo renowned for his passion for fitness, performing long and intense workout routines as part of his training daily routine, and results it has on his lean muscular physique speak for themselves.According to his coach, the sports star shows great discipline not only in his soccer skills development at training, but also when performing resistance training in the gym with his personal trainer. Along with his amazing training stamina, Ronaldo is sure to feed his body the right, nutritious fuel to keep it running at 110%. Even a small amount of “cheating” in his diet could hinder his performance, not to mention the effect it could have on his chiselled mid-section

The along with a healthy diet, Ronaldo considers proper sleep and structured workout sessions imperative to acquire and maintain an fit and low body fat physique. Cristiano Ronaldo works out 3 to 4 hours each day, around 5 days a week. He engages in different cardio , sprinting and technical drills, along with gym resistance sessions.

An often an overlooked aspect of ronaldos low bodyfat is the endless amounts of soccer skill drills he performs on a daily basis, these long “cardio” sessions help supercharge the fat burning process. The best information i have found on soccer drill to burn fat and improve your soccer skills is the EPIC Soccer Training program, i have used this myself and is simply the best soccer program available.

Ronaldo also gives his body a minimum 8 hours of sleep each night to ensure that he is well rested and ready to perform at his peak on game day, so make sure after you do all that hard work you get a good nights rest to recover.

The Principles of Ronaldo’s Diet is as follows;